Now the farmers are ready for a long battle, they said – will take some from the government

Now the farmers are ready for a long battle, they said – will take some from the government


The agitation of the farmers against the three new agricultural laws has not stopped. Thousands of farmers are camping on the Delhi border. 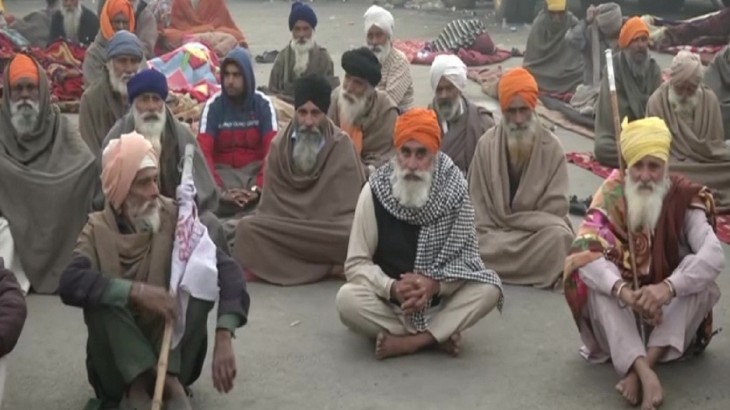 Talking to the government, now farmers are ready for a long battle (Photo Credit: File photo)

The agitation of the farmers against the three new agricultural laws has not stopped. Thousands of farmers are camping on the Delhi border. Today is the 7th day in protest against the farmers’ agricultural bill on the Tikri and Singhu borders of Delhi. The three-time settlement meeting with the government has also ended unabated. The farmers are not taking the name of withdrawal from the movement. Last night, the farmers put up tents to avoid the cold, which shows that the farmer is ready for battle.

Also read: So the government-farmers meeting was inconclusive, now eyes on December 3

A main meeting of the farmers is to be held with the government on December 3, but the farmers do not see any hope from this meeting as well. The farmer leader says that now we are not going to back down, even if we have to pay a price for it. Regarding meeting with the government, the farmers say that in the meeting the government talked about forming a committee, but we have seen earlier that if anything goes wrong in the country, a committee is formed for it, but till date any committee The solution was not found, so our demand is to repeal the agricultural laws soon.

Farmers’ organizations said that the movement will be intensified across the country until their demands are met. Farmer leaders are pushing for their demands to repeal the three Central Agricultural Laws and withdraw the Electricity Amendment Bill, 2020. Farmers leaders say that our movement will continue. Will take some from the government. If the government wants peace then it should solve the issue of the people.

Also read: Thousands of women are supporting the farmers in the movement in the open winter

It is worth noting that the government is in favor of the three new agricultural laws implemented in September that it removes the middlemen and allows the farmers to sell their produce anywhere in the country and this is a big reform related to the agricultural sector. Whereas the protesting farmers are apprehensive that the new laws will abolish the minimum support price (MSP) and procurement system and make the mandi system ineffective for various stakeholders in the agriculture sector.

However, political parties are supporting the opposition of farmers. Due to which the politics of the country has become hot. Apart from this, some people also appeared in this movement who came in midnight to support the farmers, who are associated with any organization. However, on capturing the movement, farmers say that they have now started to recognize such anti-social elements, who spread rumors among the farmers, farmers say that whatever community people will come to support them, its They are welcome. Let us tell you that CAA supporters are also appearing in this movement.