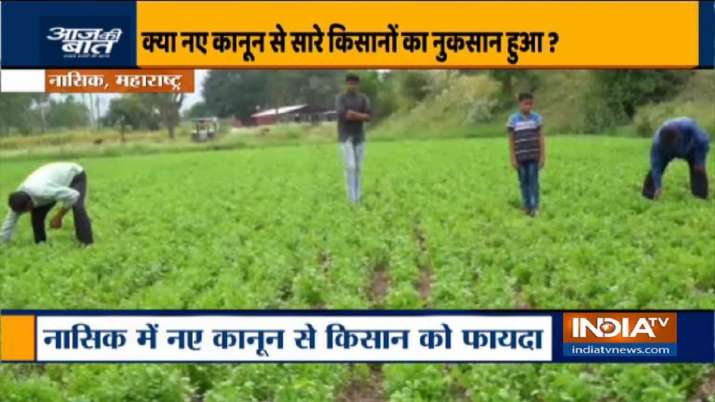 
new Delhi: Farmers are protesting against 3 laws related to farming. The farmers of some states including Punjab, Haryana are angry with these three laws. They are worried that the minimum support price on the produce may end with the new law, but did the new law harm all farmers? Reporters of India TV in different states talked to farmers to understand whether these laws are going to harm or benefit farmers. You will be surprised to know that in most of the states such farmers were found who said that they have benefited from the new laws.

Some such farmers met in Maharashtra where there is no BJP government. Nashik in Maharashtra has the highest number of onions besides wheat, sugarcane and paddy. Apart from this, grapes, bananas and other vegetables are cultivated here. These are all cash crops. The biggest loss is in the cash crop but Vinayak Hemade of Nashik said that he has benefited manifold due to the new law. Vinayak Hemade hails from Nandur Shingote village in Nashik.

This time he had cultivated green coriander on four acres, at which a cost of about 40 thousand rupees. The crop was prepared after 45 to 50 days of hard work. According to the new law, Vinayak Hemade tried to sell the crop from the farm instead of going to Mandi and he was successful. The merchant of Nashik bought the crop of Vinayak Hemade from the farm itself and for this Vinayak Hemade also paid 12 lakh fifty thousand rupees. This time Vinayak did not have to go around the market, the expenses of wages and transportation also survived. Vinayak Hemade said that the bill the government has brought is really benefiting the farmers because it is able to sell its crop directly to the farmer.

One such example was also found in Mehsana, Gujarat. Mehsana is famous for cotton cultivation. At present, cotton is being procured in Mehsana and most of the farmers are going to the mandis, but the farmers who are aware of the new law are directly contacting the traders instead of mandis. Correspondent Decision Kapur said that after the Agricultural Law was enacted, the farmers formed their own groups to have direct bargains with the traders and once the deal was closed, the traders themselves sent the trucks to pick up the goods of the farmers.

At the moment, 300 trucks are arriving daily in the hard area of ​​Mehsana to pick up cotton. Some farmers are dealing with direct traders without any group. Farmers told that they escaped market tax due to the new law. Money is being received immediately and more than Bhav Mandi. The rate of 20 kg cotton in the mandi is Rs 1100 while the cotton mill is giving Rs 1140 for 20 kg cotton.

Manmohan said that earlier when he used to sell his crop in the mandis, he used to get a very low price for his crop and payment was also delayed but after the new law was made, he would not go anywhere. Big companies come to their fields, the price of the crop is also high. Manmohan Bhardwaj told that earlier he used to get 30 rupees in one kg green capsicum mandi but now he is selling it at 60 rupees per kg. Similarly, one kg colored capsicum is also getting 135 rupees instead of 100 rupees.