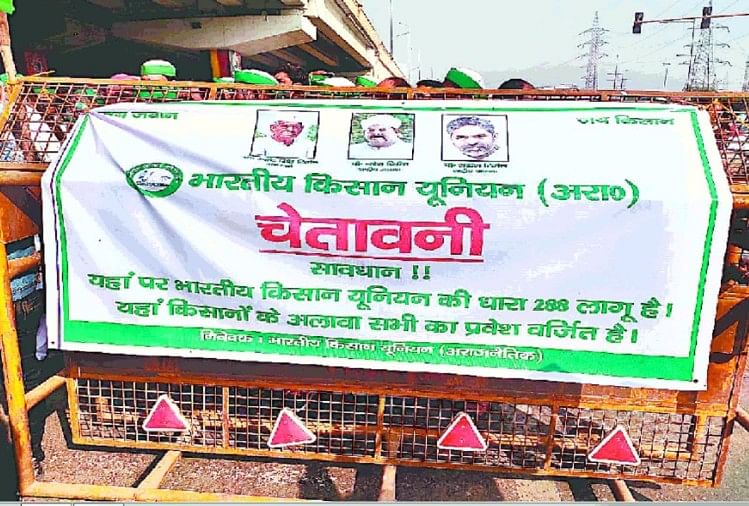 ‘Section-288’ repeated after 32 years, farmers settle village at UP gate

In protest against the agricultural laws, Bhakiyu gave a form of village at UP Gate on the third day of his agitation. The huts were built on Monday after spending a cold winter night under the flyover. Also, for the second time after the year 1988 on the Delhi-UP border, it was announced to impose its Section-288. This section of farmers is a response to section 144 of the administration. Under this, the police are not allowed to come within the limits of the farmer. Meanwhile, till evening the farmers’ batch from Punjab, Uttarakhand and UP continued. National spokesperson Rakesh Tikait announced that he would stand at the UP gate till the talks with the government on December 3, amid increasing number of farmers. After this, we talked about making further strategies.

Meanwhile, in a conversation with Amar Ujala, Rakesh Tikait, national spokesperson of Bhakiyu said that till December 3, talks with the central government, all the farmers will stay at the UP gate. During this time farmers will not block any highway or Loni border. There is also a constant contact with farmers in Punjab and Haryana. After negotiation from there, a further strategy will be prepared by sitting at the dharna site with the farmers. During this time, he claimed to have gathered a large number of farmers till the UP gate. He said that tomorrow the number of farmers will increase further.

Section 288 imposed for the second time in the country after 32 years
BKI activists showed their strength by writing section 288 of farmers after section 144 of governance between UP Gate and Delhi border. Bhakiyu announced to implement Section-288 at UP Gate. Also put up banners that section 288 of BKU is applicable in this area. Non farmers are not allowed here. Rakesh Tikait told that this is his own stream of Bhakiyu. Chaudhary Mahendra Singh Tikait first used this stream in 1988 at the Vote Club in Delhi in 1988. Under this section, the police are not allowed to come within the limits of the farmer. This also does not allow the movement to become fierce. If any anti-social elements enter, Bhakiu takes action against him under his section 288. This is the way of peace-loving movement. Tikait said that after 32 years, Bhakiyu has imposed this stream for the second time in the country.

Other parties, including Congress, AAP, organizations are giving support
Rakesh Tikait said that the Bhim Army, Congress, Aam Aadmi Party and different organizations are supporting the farmers, although this is their wish. No one is being denied support. He said on the high level meetings of the government that if the leaders are meeting then a solution is expected. Reiterating the three main demands, he said that the law on minimum support price, the farmers can go to the court on debate and the mandi committees should not be allowed to end. On the statement that farmers understand agricultural law properly, he said that the people in the school where they have studied, would have taught us in the same school, so that we understand the agricultural law. During this, he talked about not having the Loni border and highway jam.

And putting UP stove in the hut, made UP gate a village
Jaikumar Malik, the district in-charge of Bhakiyu from Rajapur, arrived in a tractor-trolley with dry straw and tarpaulins and big bamboo. The arrival of a tractor-trolley near the barricades caused a stir among the police officers of Delhi. All redeployed with paramilitary forces. But the farmers started building a hut by putting stubble in the middle of the road itself. This led to the appearance of Uppgate village. In the late evening, the farmers sitting in the hut also gobbled the hookah. Similarly, the farmers started preparing to build a hut on the other side of the UP gate.