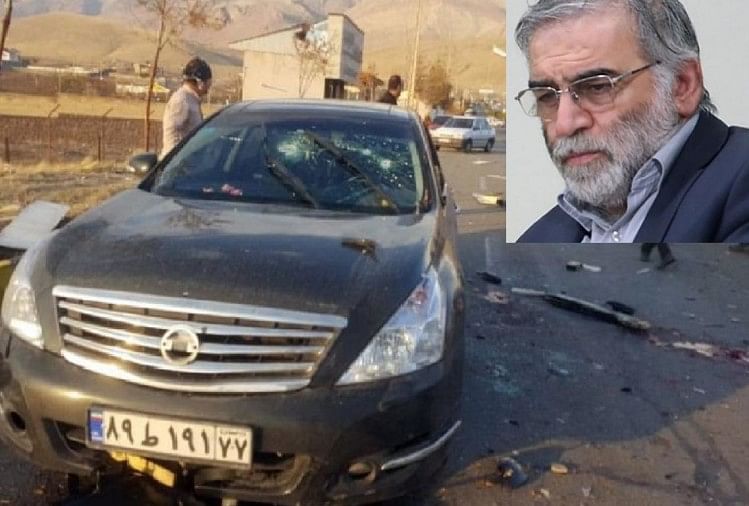 President Rouhani Vows Retaliation, Blamed Israeli Mercenaries for Assassination of Iran Top Nuclear Scientist Mohsen Fakhrizadeh – Why did Iran’s top nuclear scientist get killed? The manner of death of Sulaimani and Fakhrizadeh is the same

Iran on Friday formed a judicial committee to decide who was actually behind the killing of its Revolutionary Guard – Qudus’ Force Commander Qasim Suleimani. Sulemani was murdered last January. Within hours of this decision, Iran’s chief nuclear scientist Mohsen Fakhrizadeh was killed in Tehran. In the opinion of West Asia experts, the motive behind the killings of Sulaimani and Fakhrizadeh is the same.

Now Iran has formed a judicial committee in the case of Sulaimani’s murder because Interpol refused to take any action in the case. Interpol said that it does not investigate ‘political and military’ matters. His work is limited to the criminal realm. Now the judicial committee that Iran has formed has been tasked to gather all the facts about Sulemani’s assassination to find out who actually killed. It is then possible that Iran will take the matter to international agencies with evidence.

Meanwhile, Iran will now have to deal with the situation created by Fakhrizadeh’s assassination. According to Nadar Hashmi, director of the Denver-based Center for Middle-East Studies, Fakhrizadeh’s murder follows a fixed pattern. The motive of this pattern has been to tilt Iran or change power there. Hashmi said that Fakhrizadeh was killed in the footsteps of Sulemani’s murder. Sulaimani was killed in a drone attack near Baghdad on 3 January this year.

According to reports, Fakhrizadeh was operating the construction of Iran’s Amad nuclear plant. The plant is being built for Iran to have the capability to make nuclear bombs. Work on the Amad plant was halted in 2003. According to the International Atomic Energy Agency, before that this place was a center for scientists to meet and share experiences. Now there were signs of activities again. According to experts, a motive behind the killing of Fakhrizadeh may be to stop this work.

But according to Eli Ziranmayeh, senior policy analyst at the European Council on Foreign Relations, the killing of Fakhrizadeh will not have much impact on Iran’s nuclear capability. If Iran wants it, it is still capable of making a nuclear bomb. Geranmayeh said that while Fakhrizadeh had an important role in furthering Iran’s nuclear activities, Iran’s nuclear program is not tied to a single person. Jeramayeh said that it was just as the activities of Revolutionary Guard Qudas were not affected much by the killing of Suleimani.

That is why experts are of the opinion that the real motive behind Fakhrizadeh’s assassination is not to stop the nuclear program, but to hinder potential diplomacy. According to these experts, Iran has shown restraint despite all the furious actions so far. So the real question is, will he still do it? If it retaliates, it will of course make it harder for the Biden administration to move on the path of diplomacy and re-engage the US in the nuclear deal. The Trump administration lifted the United States from the agreement in 2015. Elected President Biden has promised to bring America back to it.