Hundreds of farmers have gathered at the Panipat toll plaza, which is intended to travel to Delhi on Friday morning. 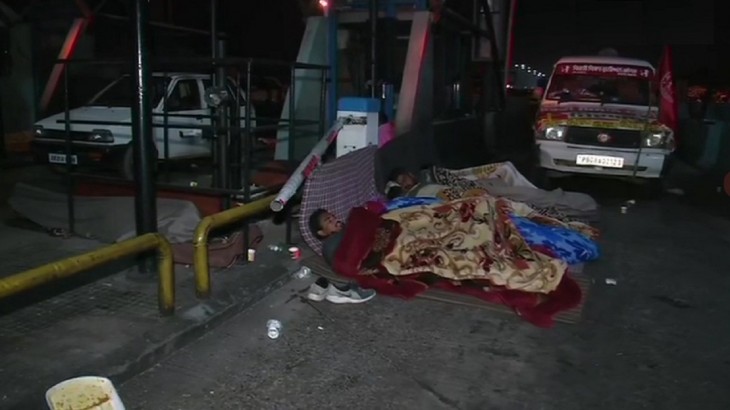 The city police has increased security at all the borders of the national capital due to farmers from Punjab coming closer to Delhi under the ‘Delhi Chalo’ march in protest against the agriculture laws of the Center. Police say that if the farmers who are protesting against the new agricultural laws of the center reach the borders of Delhi, they will not be allowed to enter the national capital. Many of the farmers of Punjab and Haryana who participated in the protest reached the national capital by late evening. In view of the farmers of Punjab, the city police has stopped traffic on the Singhu border. It is said that hundreds of farmers have gathered at the Panipat toll plaza, whose intention is to travel to Delhi on Friday morning.

Officials said that the arrival of traffic from Bahadurgarh towards Delhi on Thursday evening was also stopped. Police said, five sand-loaded trucks and three water canons (water splashes) have been deployed at the Singhu border to stop the tractors coming with the protesters. Drones have also been deployed to monitor law and order. Another official said that barbed wire fences have been built along the barriers at the forefront of the Singhu border so that the protesters cannot cross. At the same time, a large group of farmers coming from Punjab had reached the toll plaza in Panipat, about 100 km from Delhi. Bharatiya Kisan Union (Haryana) leader Gurnam Singh said that the protesters plan to spend the night there and the march will start again in the morning.

To prevent farmers from entering Delhi, the Delhi Police has deployed police forces on NH-24, Chilla Seema, Tigri Seema, Bahadurgarh Seema, Faridabad Seema, Kalindi Kunj Seema and Singhu Seema. Farmers coming from Punjab and Haryana are likely to enter Delhi from the Singhu border, in view of which a large number of police forces have been deployed there. To take stock of the situation, Delhi Police Commissioner S. N. Srivastava went to the border areas and said that the protesting farmers would not be allowed to enter the city.

He said, ‘The guidelines related to Kovid-19 have stated that no political program will be allowed, so their (farmers) request was not accepted. If they still try, we have deployed security personnel along the borders so that they are not allowed to enter the national capital. We are also in touch with Punjab and Haryana Police. Asked about the problem being faced by the passengers, the Commissioner of Police said, “Since they (protesting farmers) have blocked the national highway, there will be some problems, but we will try to solve it quickly … Instead of coming towards the national capital, they (farmers) should go back and do not violate the rules.

Although the metro service from Delhi to other cities of NCR will remain operational, the metro service from neighboring cities to Delhi will be suspended on Friday. On the other hand, police today detained around 70 people of a group protesting at Jantar Mantar in support of farmers. The protesters included members of the Left Trade Union, members of SFI and students of Jawaharlal Nehru University. A senior police officer said that more than 70 people, including women, were detained and later released.