Due to the security system, every vehicle is being tested to prevent farmers from entering Delhi, as a precaution and with efforts to curb Kovid-19 infection. Hundreds of vehicles from the Delhi-Gurugram border to Shankar Chowk on the National Highway 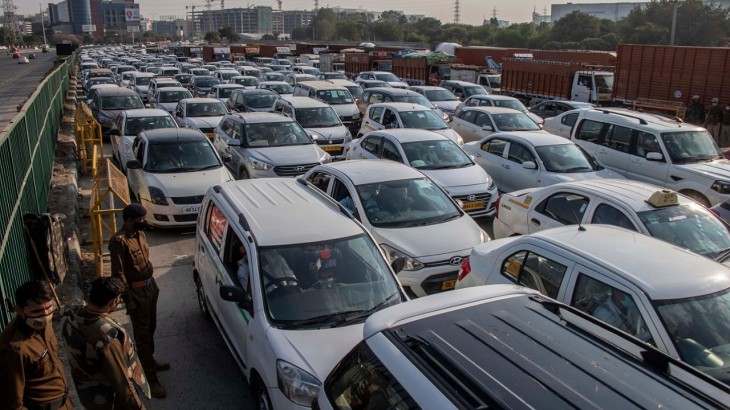 On Thursday, commuters faced heavy traffic jams on the Delhi-Gurugram Expressway amid protests by several farmers’ organizations in protest against agricultural laws. People coming on National Highway-48 got stuck on the expressway near the Delhi-Gurugram border, as Delhi Police had installed barricades to stop the farmers moving towards the national capital. The farmers were trying to reach Delhi in view of the ‘Delhi Chalo’ Aan, opposing the central laws passed in Parliament in September.

Due to the security system, every vehicle is being tested to prevent farmers from entering Delhi, as a precaution and with efforts to curb Kovid-19 infection. Hundreds of vehicles were seen queuing up on the National Highway from the Delhi-Gurugram border to Shankar Chowk. As a precaution, Haryana Police is also examining every vehicle to prevent protesters from entering the national capital.

On the other hand, the impact of agitation by farmers’ organizations in Gurugram district was negligible, as no untoward incident was reported from anywhere across the district and the situation remained peaceful throughout the day. In view of the opposition of various peasant bodies, the district administration and Gurugram police had made elaborate arrangements to maintain law and order in the district. As a precaution, several police personnel along with duty magistrates, supervisory officers and duty in-charge were deployed in the border areas.

According to the district spokesperson, the police put up check-posts and deployed a large number of security personnel at seven points, connecting Gurugram with other districts and territories, including the KMP Expressway, Sohna-Nuh border, Kapadivas border on Delhi-Gurugram border, Nuh range included. Apart from this, strict security arrangements were also made on NH-48, Bargurjar, Pachgaon-Mohammadpur Ahir Road near Hotel Best Western Resort and near Panchgaon Chowk. The district administration had also arranged for videography and photography at these seven points to record any untoward incident.

As a precaution, three Reserve Forces were also kept ready so that they could be dispatched immediately if needed. The district spokesperson said, “Despite the protest from the farmers, the situation remained peaceful and functioning in all government and private offices continued like normal days. The markets and shopping malls in the district were also open like normal days. State transport buses and rail services Also restored. “