This is not a fantasy, but a strange but harsh reality in the upcoming Asiad Village in Delhi, where a tree has caused such havoc that it has reached the Prime Minister’s Office. 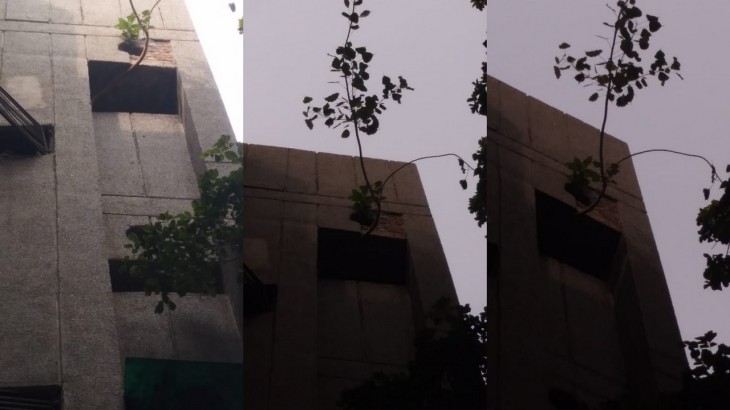 Think if you buy a flat in Delhi’s main real estate market with a market value of six to seven crore rupees, but what will happen to you if a peepal tree is hollowing its foundation? If that tree is weakening the roof of your expensive house and there is a possibility of it falling anytime and you do not see any help in such situation, then your problems can be estimated.

This is not a fantasy, but a strange but harsh reality in the upcoming Asiad Village in Delhi, where a tree has caused such havoc that it has reached the Prime Minister’s Office. Retired IRS officer Ajay Agnihotri is one of about 80 people who bought a flat in a largely government-owned prime housing society. But now Agnihotri has to wander from one place to another with his problem. Even he knocked on the doors of the Prime Minister’s Office twice. Senior citizens claim that a peepal tree has emerged in the flat they have purchased.

He told the media that at the end of last year, a tree came out of the roof with its roots attached to the flat owned by MTNL, which has kept its flat closed. That tree had reached our house. Despite complaining to RWA and Ministry of Telecom, there was no benefit. After this I had to knock on the door of PMO. I had no choice, because RWA did not have rights and we did not have the key. However, after reaching the PMO, people arrived within 24 hours and the tree was removed. “

But the repair work was done in a lousy manner. He alleged that recently another 25-foot peepal tree, which was much larger than the previous tree, has been seen. Agnihotri, while talking to the media, claimed that it too has its roots in the same closed MTNL flat. He said, “Last time, after receiving my complaint to the PMO, when the engineer came, he gave me a number to contact me for further problems. But he never gave any answer to this. Now an even bigger Tree is.

He told that because of this tree there is a danger to the roof of his house. He said, I have also sent pictures of the tree to the CMD of MTNL, but to no avail. The retired government official said, this issue has become even bigger now. MTNL claims that they are running in losses, while they have five flats here, which are expected to have a market value of Rs 35 crore. However, all have been kept closed. The CAG should audit its assets.