Amrinder singh Lunch Diplomacy, Navjot Singh Siddhu May Get Cabinet Birth … So that’s why the ‘Captain’ of Punjab has called ‘Guru’ for lunch

Amrinder singh Lunch Diplomacy, Navjot Singh Siddhu May Get Cabinet Birth … So that’s why the ‘Captain’ of Punjab has called ‘Guru’ for lunch


There was a discussion of a reshuffle in the cabinet for a long time, but this was not possible due to pressure from the party high command to bring Sidhu back to the cabinet. 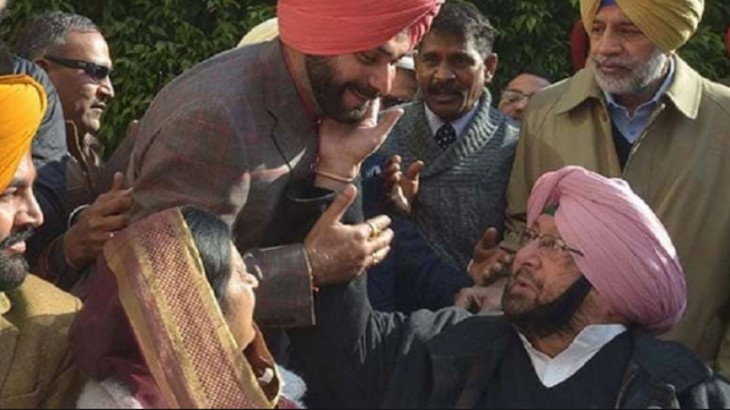 It seems that the fallout between Punjab Chief Minister Amarinder Singh and Congress leader Navjot Singh Sidhu has been dispelled. Actually, Chief Minister Amarinder Singh has sent Sidhu for lunch on Wednesday. It is believed that the two leaders can discuss the politics of the state and the center during the meeting at lunch. The two leaders had not spoken to each other for a long time. This meeting is being seen as forgetting the old things in political circles. Chief Minister’s media advisor Raveen Thukral said that the state and national level politics is expected to be discussed about the lunch meeting between the two leaders.

Basis of peasant movement
Explain that the farmers of Punjab have opened a front against the three agricultural laws of the central government. Farmers in Punjab were on the roads and rail tracks for several weeks. Due to this, the central government had stopped rail services in Punjab. The state’s economy derailed when the supply service in Punjab was affected due to the rail service coming to a standstill. Electricity crisis occurred in the state. Later, after talks between the state government and the Center, the farmers emptied the tracks for 15 days. However, farmers have threatened to stop the rail services again if the talks with the Center fail. After the assurance of the state’s Amarinder government, the railways have partially started train services.

The warmth of relationships in the month
In this session called for agricultural bills, Sidhu was the first Congress leader who was given the chance to speak in the Punjab Assembly after the Chief Minister. The important thing was that Sidhu himself had called the captain and told him that he had to speak on agriculture bill after him (Captain). However, during the Congress sit-in held in Delhi on November 4, differences between the two leaders came to light. When Sidhu raised the matter of cross-fight during the dharna. After this, the captain said that he has not come to fight anyone. He has come to speak. Sidhu was upset at this.

Also read: … when Ahmed Patel did not take this gift of Indira Gandhi! Learn everything

Sidhu’s return to cabinet is also possible
With the Captain calling Sidhu for lunch, the rumor of expansion in the Punjab Cabinet has started. There was a discussion of a reshuffle in the cabinet for a long time, but this was not possible due to pressure from the party high command to bring Sidhu back to the cabinet. At the same time, after the lunch diplomacy by the captain, these discussions are strengthened that soon there may be a change in the Punjab cabinet and Sidhu may return to the cabinet. It is believed that in the new equation, there will be an attempt to bridge the rift between Captain and Sidhu. At the same time, Captain Sidhu can be invited to come to the cabinet again. A chair in the cabinet has been lying vacant ever since Sidhu left the post of cabinet minister.

Harish Rawat reconciled
Congress general secretary and Punjab in-charge Harish Rawat laid the foundation for improving the relationship between Captain and Sidhu. Rawat met Sidhu at his house. After this, Sidhu appeared on the Congress platform after a long time during Rahul Gandhi’s tractor journey on October 4. However, Sidhu took a strong stand against the Punjab government on this platform. There was also a lot of resentment in the Congress on this. In Rahul Gandhi’s presence, Sidhu was not given a chance to speak on the Congress platform again due to this check, but Harish Rawat continued to support Sidhu. The effect of which was also seen. When the Punjab Legislative Assembly session came on October 19, Sidhu also came to attend this session, while Sidhu had never attended the Vidhan Sabha meeting after the 2019 Lok Sabha elections.