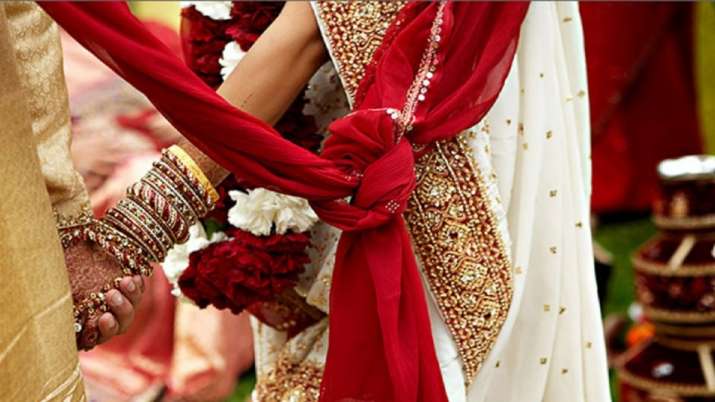 
Lucknow. Corona cases are once again seen to be increasing. Cases of corona infection can increase even more rapidly during the wedding season. For this reason, administration in various states and cities is making rules for marriage, marriage ceremony. Now Uttar Pradesh government will issue advisory on weddings. According to information received from sources, only 100 people will be allowed to attend the wedding ceremony. In the open lawn, less than 40 percent of the total capacity will be able to attend the ceremony.

Significantly, 35 more Kovid-19 patients died in Uttar Pradesh in the last 24 hours till Sunday and 2,588 more people were confirmed to be infected with Corona virus. Additional Chief Secretary of the Department of Medical and Health Amit Mohan Prasad had said on Sunday that the total number of deaths due to the virus in the state has increased due to the death of 35 more people from Kovid-19 in the state during the last 24 hours. 7,559.

According to the Health Department report, the highest number of deaths occurred in the capital Lucknow. Apart from this, four patients died in Meerut and three in Jalaun due to Kovid-19. According to the report, 2,558 new patients were confirmed to be suffering from Kovid-19 in the state during the last 24 hours.

The department had said that the maximum number of 351 new patients has come up in the capital Lucknow. Apart from this, 283 new patients have been confirmed to be infected with the corona virus in Meerut, 189 in Ghaziabad, 171 in Gautam Buddha Nagar, 118 in Kanpur, 110 in Prayagraj and 102 in Varanasi.

Prasad had said that at present, the total number of under-treated patients in the state is 23,806, out of which 10,902 are in home isolation while 2,356 are undergoing treatment in private hospitals. Prasad said that the remaining patients are currently being treated free in L-1, L-2 and L-3 hospitals of the state government.

The Additional Chief Secretary had said, “A total of 4,95,415 infections have been cured so far, due to which the rate of recovery of Kovid-19 patients in the state is 94.04 percent”. In the midst of such a situation, the government is again worried about the Corona virus and strict steps are being taken to stop the pace of the Corona virus.

Earlier, the Rajasthan government took big steps to prevent the spread of Corona virus infection. According to the new rule, without marrying without notice, a fine of Rs 5000 will now be imposed.

Complete information about new rules and penalties in Rajasthan