Intelligence agencies have received the news that the slain militants had walked 30 km from Jaish’s camp on the Samba border in the sugar mill. All the commandos were trained jihadi attackers. 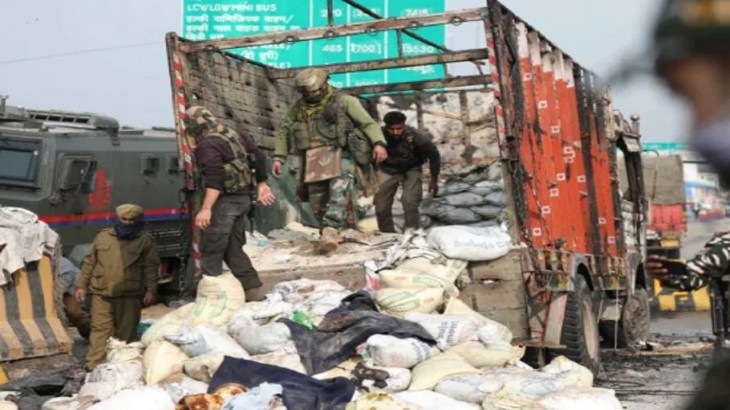 Even though Pakistan continues to do nothing, it has its hand in every terrorist attack or terrorist infiltration in India. Evidence of this starts to be found only in the initial investigation. Nagrota encounter is also no exception. After the Jaish-e-Mohammed killed four terrorists, the security forces have found so much evidence, that even a blind man will put Pakistan in the dock. Now investigation has revealed that all these suicide terrorists were given commando training in Pakistan. Not only this, Kasim Jan, the main accused in the 2016 Pathankot attack, was handling the terrorists killed in the encounter, who is the operational commander of Jaish. Qasim reports directly to Masood Azhar’s brother Rauf Asghar.

Terrorists reached the pickup point after walking 30 km
According to a report in the English newspaper Hindustan Times, new information has been received about the four Pakistani terrorists who were killed. Intelligence agencies have received the news that the slain militants had walked 30 km from Jaish’s camp on the Samba border in the sugar mill. After this, he had reached the pick-up point at Jatwal. Please tell that the route from Samba to Kathua is 6 kilometers. In such a situation, it can be said that the terrorists had entered India in the dark of night. According to the agency, there are many fighters of Qasim in South Kashmir who are ready to carry out any incident at his behest. Let me tell you that Qasim is one of the main launch commanders of Jaish terrorists in India and he has direct connections with terrorist Mufti Rauf Asghar.

Dozens of suicide bombers attempt to infiltrate Gujranwala
According to the news, Indian security agencies have been reported that Jaish-e-Mohammed militants are increasingly active in Jammu and Kashmir since the withdrawal of US forces from Afghanistan and the resurgence of Taliban. According to sources, efforts are being made to admit 14 specially trained terrorists into India through Gujranwala. “Around 200 terrorists of different organizations are waiting to infiltrate the launch pads on the Line of Control,” the newspaper quoted an official as saying. It is learned that the Al Badr Group is again raising its head. At the same time, a new terrorist organization, named Lashkar-e-Mustafa, is coming up, whose chief is Hidayatullah Malik. Apart from this, Lashkar-e-Taiba group of Pakistan is training 23 terrorists in Jungle-Mangal camp of Khyber Pakhtunkhwa.

Terrorists crossed the border from Samba sector
A senior officer said, ‘The pick-up point air distance from the international border is 8.7 km and Jaish’s shakargah is 30 km from Camp Jatwal. The terrorists had probably crossed the border into Mawa village of Samba sector, which is between Ramgarh and Hiranagar sector. There are many rough roads near Naunath Nala and goes from the pick point to the international border. Naunath Nala is found in Bin Nala of Chak Jamal village in Pakistan. Probably the terrorists covered this distance of 2.5 to three hours on foot. Investigations so far have revealed that the four terrorists probably boarded the truck at 2.30 to 3 pm. The truck of number JK 01 AL 1055 crossed the Saror toll plaza at 3.44 am while going towards Jammu. The truck then turned towards Kashmir from Narwal bypass and was rammed by security forces at Ban Toll Plaza at 4.45 am.