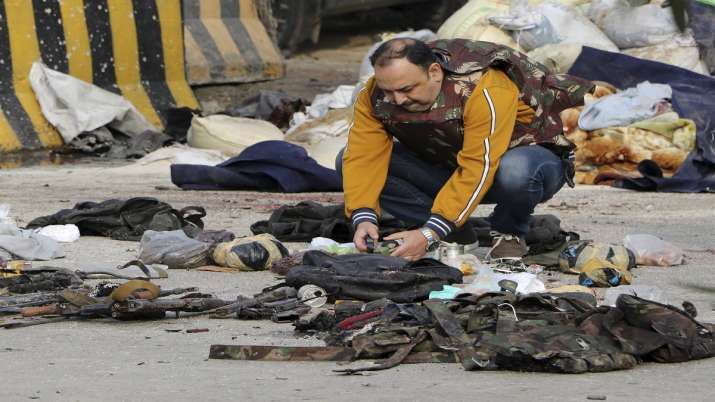 Nagrota encounter latest news terrorists connection to pakistani company. Nagrota Encount: Terrorists in constant contact with handlers sitting across the border, this was recovered from the recovered Pakistani manufactured goods


Jammu. On Thursday, the security forces killed four terrorists at the Ban Toll plaza of Nagrota on the Srinagar highway outside Jammu city. After the encounter, the police have recovered a large number of weapons and many other such items from the truck, which clearly confirm the Pakistani links to the terrorists. Police have recovered a digital mobile radio from the terrorists nearby, which has been made by Pakistani company Microelectronics. The messages received on this digital mobile radio have confirmed that the terrorists were constantly in contact with their handlers sitting across the border. Apart from this, smart phones, medicines, shoes, wireless sets and GPS devices manufactured in Pakistan by a Pakistani company Q Mobile have also been recovered from the terrorists.

Let us tell you that four suspected Jaish-e-Mohammed terrorists were killed and two policemen were injured in an encounter on the Jammu-Srinagar highway on Thursday. Top police officials gave this information. On the outskirts of Jammu city, the encounter started when a truck carrying the recently infiltrating militants was stopped, officials said. Jammu Inspector General of Police Mukesh Singh said the terrorists had come with the intention of carrying out a “big conspiracy” which has been foiled.

Read- How will soldiers deal with China’s challenge in winter on Ladakh border? Army has made special arrangements

Reacting to this success of the security forces, Lieutenant Governor Manoj Sinha said, “No external force can distract us from our path of peace and progress.” Inspector General of Kashmir Vijay Kumar said in Srinagar that four terrorists this month The District Development Council (DDC) to be held at the end of the elections wanted to disrupt the election process as Pakistan is trying to disrupt the political process.

At the same time, Inspector General of Jammu, Mukesh Singh, while giving detailed information to journalists in Jammu, said that since the announcement of the program of the DCC election, the police has been receiving information about possible infiltration by terrorists in Jammu and Kashmir. Singh said, “We deployed all our teams to the posts. Intelligence was received that the terrorists could infiltrate with huge quantities of weapons and explosives. ”

Read- Coronavirus Vaccine Price: What can be the price of Corona Vaccine in India?

The police officer said that a truck was stopped at five o’clock this morning near the toll plaza in Banota area of ​​Nagrota, but the truck driver escaped leaving the vehicle. As the CRPF and policemen started searching the vehicle, the terrorists hiding in the truck opened fire. According to Singh, the militants were asked to surrender, but they refused to do so, after which the encounter started. He said that other security forces also joined it, after which fierce firing took place. During this time, terrorists threw grenades and opened fire.

Read- Chhath Puja: Reporters questioned Corona with the woman who reached the ghat, then the woman got agitated, see what answers

The police officer said that four militants were killed and two policemen were injured in a three-hour encounter. He said that a truck loaded with rice pots caught fire during the encounter. The bodies of the terrorists hidden inside the truck have been recovered. Singh said 11 AK rifles, three pistols, 24 magazines, 29 grenades, six UBGL grenades were recovered from the slain militants. Apart from this, a large quantity of drugs, explosive material, bundles of wires, electronic circuits and bags have been recovered from them.