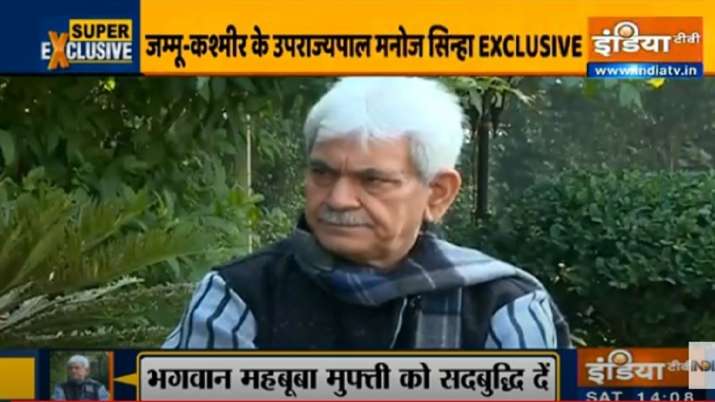 
new Delhi. On Thursday, security forces in Jammu and Kashmir’s Nagrota failed to carry out major planning of Pakistan-backed terrorists. Four militants were killed by security forces at the toll plaza outside Jammu city. India TV spoke to Jammu and Kashmir Lieutenant Governor Manoj Sinha on various aspects of the political situation and the state from terrorist incidents.

Manoj Sinha said that according to intelligence input our neighbor had devised a big strategy, some conspiracy. The coordination between our security forces is very good. Intelligence agencies are also doing a good job. We got the benefit of this. The amount of weapons recovered indicates that these people want to do something big. Especially 26/11 is coming to a close, people think that on their anniversary these people wanted to do some karnama. Security forces have had a lot of hands in the last one and a quarter years. Security forces have been very successful in controlling terrorism.

On the question of whether the withdrawal of Article 370 has benefited the security forces, Manoj Sinha said that the situation has improved in the last one and a half year, due to no political interference, the situation has got better. Constant efforts are being made by the terrorists but we are satisfied that we are not getting success. Our forces are fully alert, alert, our borders are completely secure.

Manoj Sinha said that some people are trying to disrupt the elections so that the elections are not peaceful. Till now, there was a two-tier system in Jammu and Kashmir, I felt that there should be a three-tier system here too, we will try fully to make the election fair. Regarding security in elections, he said that on behalf of the Ministry of Home Affairs, we have demanded additional force. He said that the number of forces on the border has increased, due to which the scope of infiltration has reduced. Those people are now trying to fund terror through Norcotics, drone has also tried to drop Norcotics and weapons, some of which we have got success in.

He said that after this election we will set up District Development Board, which is important for democracy. On the question of the safety of the candidates, Manoj Sinha said that the administration is protecting the candidates, giving them complete freedom to campaign from morning to evening. On Mehbooba’s allegations, Manoj Sinha said that there is no truth in this. We will ensure that everyone gets equal opportunities. Every candidate will get equal opportunity. We guarantee free and fair polls.

On the question of Mehbooba Mufti’s tricolor statement Farooq Abdullah’s China statement, he said that those who have sworn in the Constitution of India should take care of the dignity of the language. God will give them wisdom and pray this. He said that the state is not known to some people in any state. The people of Jammu and Kashmir are more interested in development, peace.