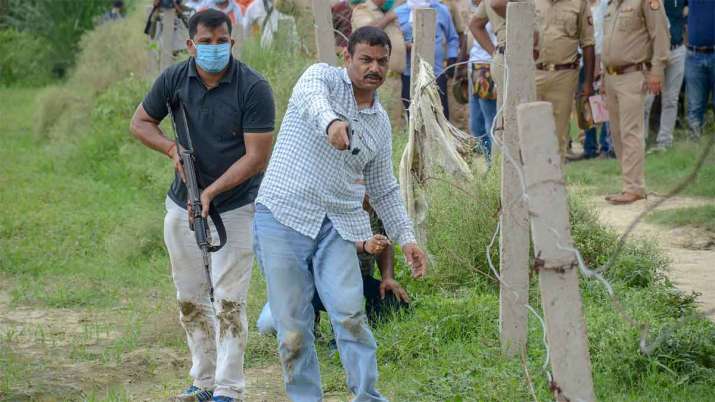 These 8 policemen can be served

The arrest of 8 policemen, demotion of 6 policemen and departmental proceedings against 23 policemen on charges of connection with Vikas Dubey, a gangster of Bikaru village, could begin soon. Among the 8 police officers who have been directed by the administration to stop serving, former police station chief Vinay Tiwari (now detained in jail) posted at Chaubepur police station in Kanpur, Deputy Inspector-General of Police Azhar Ishrat, Krishna Kumar Sharma, Kunwar Pal Singh, formerly posted at Chaubepur. , Vishwanath Mishra, Sub-Inspector Avnish Kumar Singh, posted at Krishnanagar, Lucknow, Abhishek Kumar, posted at Choubepur, and Rajeev Kumar, a recruit, were named.

6 policemen will be demoted
The policemen whose names have been proposed for demotion from the government include Inspector Ramamurthy Yadav of Bajaria, Anjani Kumar Pandey, former Inspector of Lucknow Krishnanagar, Sub Inspector Chaubepur Diwan Singh, Chief Reserve Lakh Singh, Rakshi Vikas Kumar and Kunwar Pal Singh. Apart from this, the government has directed departmental action against 23 policemen. The government suspended IPS officer Anant Dev, who was the police chief in Kanpur last week on charges of colluding with gangster Vikas Dubey. Additional Chief Secretary (Home) Avnish Kumar Awasthi said that Anant Dev has been suspended based on the SIT report.

Know what happened on the night of 2 July
Let me tell you that on the night of July 2, when the police arrived in Bikaru village to catch Vikas Dubey, he along with his colleagues shot 8 policemen by firing bullets from the roofs. According to the police, when Vikas Dubey tried to escape while being brought back to Kanpur after his arrest in Ujjain on July 10, he was killed in an encounter. The government then constituted a three-member SIT to investigate the link between the police personnel and the gangster. The SIT submitted the report to the state government in the past, recommending action against police personnel and administrative officers.

‘Policemen used to be informers’
This report stated that the policemen were allegedly informers for Vikas Dubey and used to tell him whenever the police reached for raids. When the SIT scrutinized the records of Vikas Dubey’s mobile phone for the last one year, it was found that many policemen were in regular contact with him. On July 11, the government had constituted the SIT under the leadership of Additional Chief Secretary level officer Sanjay Bhusha Reddy, in which ADG Hariram Sharma and DIG J. Ravindra Gaur included. The SIT was earlier required to submit a report by 31 July, but the government later extended the deadline.