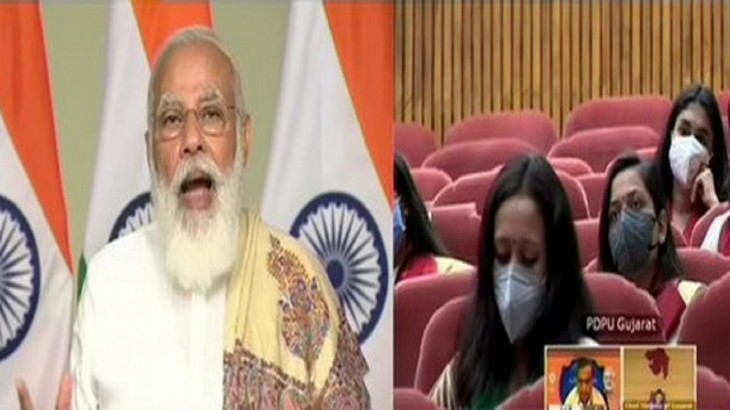 Prime Minister Narendra Modi on Saturday addressed the 8th convocation of Pandit Deendayal Petroleum University, Gandhinagar. Addressing the students through video conferencing, he said that the students passing out from the institute will become the new strength of the country. The Prime Minister said that there was a time when people used to raise questions about how far such a university would be able to grow, but the students here, the professors and the professionals who emigrated from here have answered all these questions. In his address, he said that the youth of the 21st century will have to move forward with a clean slate. The Prime Minister said that you see that the same people succeed in life, the same people do something by which there is a sense of sense of responsibility in their lives.

Prime Minister Narendra Modi on Saturday laid the foundation stone of the 45 MW generation plant of Solar Photo Voltaic Panel and Center of Excellence on Water Technology during the 8th convocation of Pandit Deendayal Petroleum University through video conferencing. During this, he also inaugurated the sports complex in the university campus. About 2600 students received degrees and diplomas in this convocation. During this time, Prime Minister Modi stressed on reducing the carbon footprint and increasing the share of natural gas in energy needs.

During this period, Prime Minister Narendra Modi told the youth who have obtained degrees, ‘Today you are entering the industry at a time when due to the epidemic, major changes are taking place in the energy sector of the whole world. In such a situation, there is immense potential for growth in the energy sector, entrepreneurship, employment and employment in India today. Modi said that today the country is moving ahead with the goal of reducing its carbon footprint by 30 to 35 percent. Efforts are to increase the share of natural gas in our energy needs by 4 times in this decade.

The Prime Minister told the youth, ‘To be a graduate at a time when the world is facing such a big crisis, it is not an easy thing. But your abilities are much bigger than these challenges. What are the problems, more important than what is your purpose, what is your performance and what is your plan? He taught the youth that it is not that successful people do not have problems, but he who accepts challenges, confronts them, defeats them, solves problems, he succeeds.