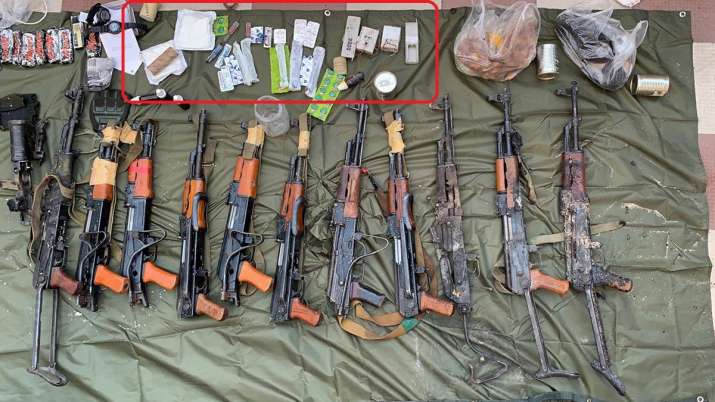 
Srinagar: 4 militants have been killed by security forces at Toll Naka near Nagrota in Jammu and Kashmir. While a huge cache of arms and ammunition have been recovered from the terrorists, there is some evidence from them that establishes a relationship between them and Pakistan. In fact, security forces have received medicines made in Pakistan from the slain terrorists.

Significantly, most of the time, terrorists bring medicines made in Pakistan. After today’s encounter, when the security forces recovered the goods from the spot, they also got medicines and injections, which are made in Pakistan. Apart from this, a huge cache of arms and ammunition was recovered from the terrorists, which can be said that he was planning something big.

IG Jammu Mukesh Singh said that 4 terrorists have been killed in the joint operation of the security forces, which are yet to be identified. He said 11 AK 47 rifles, 3 pistols, 29 grenades (left from firing), 6 UBGL grenades, mobile phones, compasses, and many other devices and pivot bags have been recovered from the terrorists. With such a large cache of weapons, terrorists could carry out any major terrorist event.

According to IG Mukesh Singh, at 5 am on Thursday, when the checking was going on and a truck was stopped, when the driver was unloaded, he escaped from there, when suspected the truck was searched and police and CRPF during the search The party opened fire and a retaliation was launched. He told that the encounter lasted for about 3 hours.

He said that during the encounter, militants fired heavy grenades and other ammunition on the security forces. Two policemen have also been injured in this operation, who are currently out of danger. According to IG Mukesh Singh, the weapon which has been recovered from the terrorists is the biggest consignment in the last few years, each terrorist had 3 big and one small weapon which is the first in itself.

IG Jammu Mukesh Singh said that ever since the DDC election process started in Jammu and Kashmir, there were intelligence inputs that some infiltration is possible and the terrorists are trying to gang up with heavy weapons. He said that after the last 2-3 incidents, all the points were alerted and told that all the points should be deployed in sufficient quantity by the security forces.