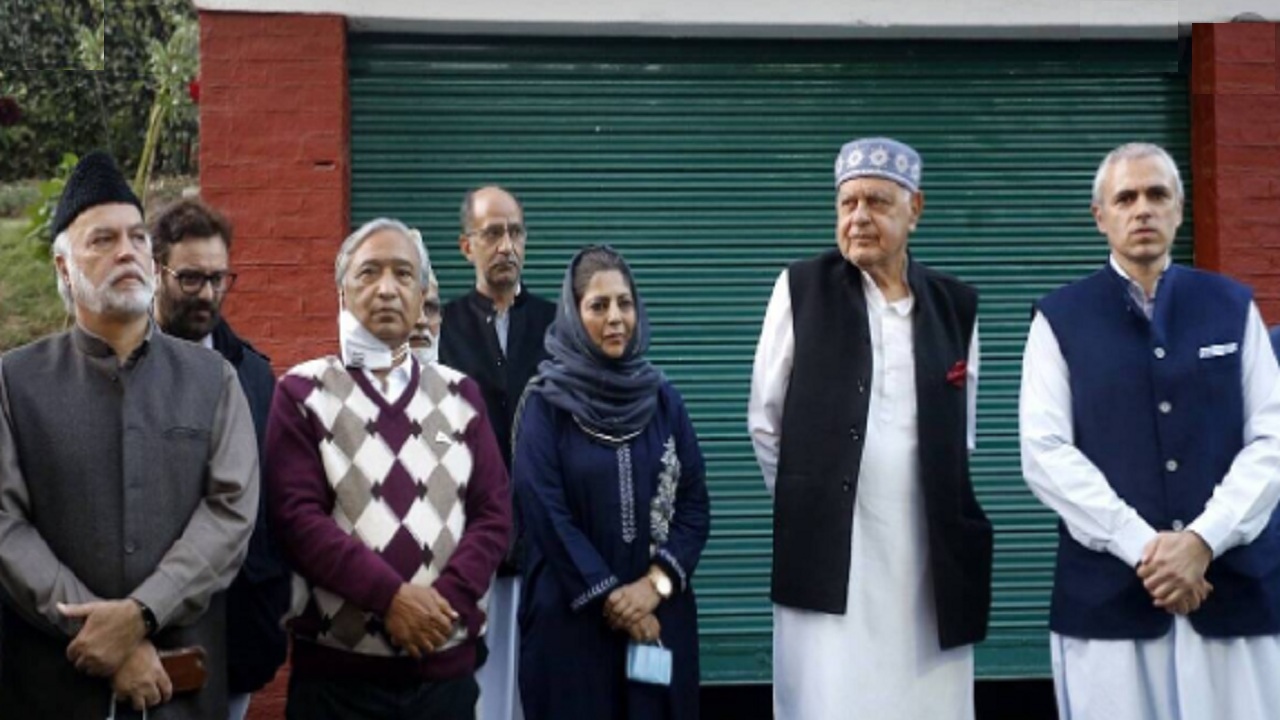 Before the local body elections in Jammu and Kashmir, Union Home Minister Amit Shah secretly called the manifesto alliance (PAGD) a nefarious global alliance that seeks a return to a period of terror and unrest with the Congress. His statement received a sharp response from the Congress, National Conference and PDP, and terming the remarks as baseless, these parties targeted the minister, saying that his statement reflects the frustration of the BJP which is upsetting to know that the elections in Jammu and Kashmir Unified political groups will fight together. In a series of tweets, Shah called the PAGD a ‘secret gang’ and alleged that he wanted the intervention of foreign forces in Jammu and Kashmir.

Gukar gang wants to return to terror-unrest: Shah
He said, ‘Congress and the Guptagar gang want to bring Jammu and Kashmir back to the era of terror and unrest. By removing Article 370, we want to take back the rights we have given to the Dalits, women and tribals there. That is why the people of the country are rejecting them from everywhere. Shah’s statement came before the first phase of the district development council elections on November 25. This is the first political exercise in the state after the Center on August 5 last year decided to repeal Article 370 granting special status to the state and split the state into two union territories, Jammu and Kashmir and Ladakh.

Sonia-Rahul Gandhi clear Congress stance: Shah
Significantly, in some places in the Congress and PAGD, there has been agreement on the seat sharing. On this, Amit Shah stressed that Jammu and Kashmir was, and will remain an integral part of India and that the people of the country will not tolerate the nefarious alliance formed against national interests. He said, ‘The gang will either follow the national sentiment or else the people of the country will drown it.’ He asked Congress President Sonia Gandhi and former President Rahul Gandhi to clear the party’s stance on the steps of PAGD. He said, ‘Gupkar gang has also insulted the tricolor of India. Do Sonia ji and Rahul ji secretly support such steps of the gang? They should make their stand clear to the people of India.

Congress counterattack
The Congress retaliated, alleging that Shah’s statement in this case was misleading, mischievous and sheer. In a two-page statement released on Twitter, the party’s chief spokesperson Randeep Surjewala accused Shah of making mischievous statements about Jammu and Kashmir. He said that the Congress was never in favor of international intervention in Kashmir and was committed to the country’s identity, integrity and tricolor. He said, ‘Amit Shah and Modi government may need a new lesson on nationalism as their parent organization RSS did not hoist the tricolor at its headquarters till 52 years after independence.’ According to Surjewala, the BJP is criticizing the Mehbooba Mufti-led PDP without thinking that they were partners in power after 2014. The Congress leader asked Shah who was responsible for the release of Jaish-e-Mohammed founder Masooh Azhar along with two other terrorists in Kandhar in exchange for the hijacked passengers of Indian Airlines hijacked aircraft IC-814 in December 1999 and the 2016 terrorists After the attack, who brought the ISI inside the Pathankot air base.

ALSO READ: PM Modi’s attack on PAK on BRICS platform – Those who support terror be opposed

National Conference said the allegations were frustrating
Former Jammu and Kashmir Chief Ministers Omar Abdullah and Mehbooba Mufti criticized Shah’s allegations, alleging that the Home Minister’s decision to contest the local body elections of the political alliance and not give an open exemption to the BJP and its allies was a reason for the “frustration” of the Home Minister. National Conference vice-president Omar Abdullah said, ‘We are not a gang Amit Shah, we are a legitimate political alliance that has fought elections and will continue to fight and this is what is bothering you.’ Taking a direct attack on the newly formed ‘Jammu and Kashmir Apni Party’, Omar Abdullah tweeted, ‘I can understand the frustration behind this attack by Hon’ble Home Minister. They were told that this coalition is preparing to boycott the election. This would have given open ground to BJP and newly formed party. We did not fulfill their expectations. He said that only leaders of Jammu and Kashmir can be detained for taking part in elections and supporting the democratic process and can be called anti-national. He tweeted, “The truth is that anyone who opposes the BJP’s ideology is declared corrupt and anti-national.”

Mufti is also not behind
At the same time, Mehbooba tweeted one after the other, saying, ‘BJP’s tactics of dividing India can be gauged by presenting themselves as messiahs and political rivals as enemies of the country.’ He said, “In place of rising unemployment and inflation (issues), love jihad, piecemeal and now secretly the gang has dominated the political discourse.” The PDP chief questioned whether even contesting elections in the coalition has now become anti-national. He said, ‘BJP can do many alliances in its hunger for power, but how are we weakening national interests by creating a united platform.’ He tweeted, ‘Getting rid of old habits is not easy. First the BJP went on to discuss that the crumbling gang has threatened India’s sovereignty and now they want to prove us anti-national by ‘stealth gang’ attacks. Ironically, the BJP itself publicly violates the Constitution.